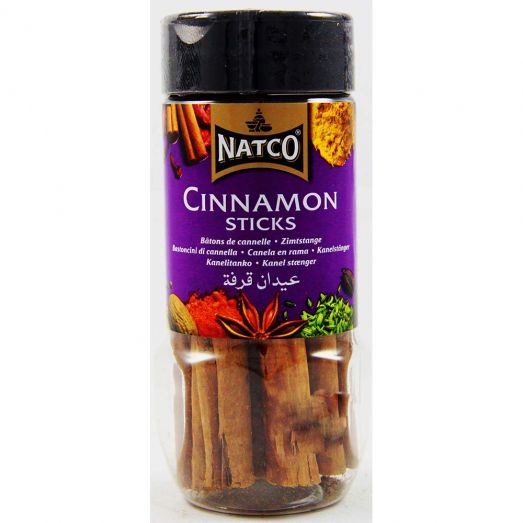 Cinnamon is actually the dried bark of certain laurel trees. Cinnamon sticks are made from long pieces of bark that are rolled, pressed and dried. True cinnamon is native to Sri Lanka but elsewhere cinnamon comes from Vietnam, China, Indonesia and Central America. Cinnamon has a sweet, woody fragrance in both ground and stick forms. Its use as a spice dates back thousands of years, and it is still possibly the most common baking spice. Cinnamon is found in cakes, cookies and desserts throughout the world. Cinnamon is also used in savoury chicken and lamb dishes prepared in the Middle East. Ground cinnamon is great with chocolate desserts and drinks, while stick cinnamon is a favourite for flavouring a variety of hot beverages.

Culinary Uses: Cassia and cinnamon have similar uses, but since it is more delicate, cinnamon is used more in dessert dishes. It is commonly used in cakes and other baked goods, milk and rice puddings, chocolate dishes and fruit desserts, particularly apples and pears. It is common in many Middle Eastern and North African dishes, in flavouring lamb tagines or stuffed aubergines. It is used in curries and pilaus and in garam masala. It may be used to spice mulled wines, creams and syrups. The largest importer of Sri Lankan cinnamon is Mexico, where it is drunk with coffee and chocolate and brewed as a tea.