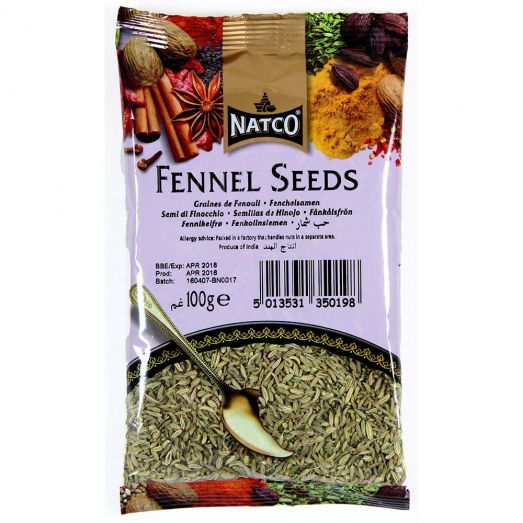 Also called "soonf" or "saunf", these have a warm aroma and a sweetish taste like aniseed. Tastes great with seafood, pork, stuffings, sauces, pickles and some curries. In India it is chewed as a natural breath freshener and as an aid to digestion.

Fennel seeds come from the plant Foeniculum Vulgare Dulce. As the "dulce" in its name suggests fennel has a sweetish taste and a mild aniseed flavour. The flavour is enhanced by dry roasting the seed or frying it in the early stages of cooking a curry.

Culinary Uses: As a herb, fennel leaves are used in French and Italian cuisine’s in sauces for fish and in mayonnaise. In Italy fennel is also used to season pork roasts and spicy sausages, especially the Florentine salami finocchiona. It is traditionally considered one of the best herbs for fish dishes. The English use fennel seeds in almost all fish dishes, especially as a court bouillon for poaching fish and seafood. It is used to flavour breads, cakes and confectionery. It is an ingredient of Chinese Five Spices and of some curry powders. Several liquors are flavoured with fennel, including fennouillette, akvavit, gin and was used in distilling absinthe.

Reviews
Write Your Own Review
Feefo Reviews
Related Products
Check items to add to the cart or
We found other products you might like!