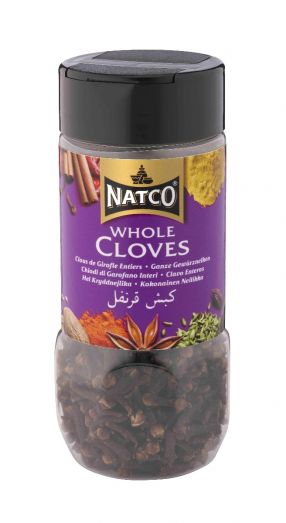 One of the world's oldest and most useful spices. Use to make authentic garam masala and in various dals and pilau rice. Has a vast range of uses in all types of cooking.

Cloves are native to Indonesia's Molucca Islands. However, cloves now come from Madagascar, Brazil, Panang and Ceylon as well. Most people would be surprised to learn that much of the world's clove crop is used in Indonesia to make clove cigarettes. Elsewhere, cloves - considered one of the most pungent of spices - are used in spice cookies and cakes. Ground cloves add a spicy taste to baked goods such as gingerbread, cookies, applesauce, muffins, cakes and other sweets. Cloves are also commonly found in barbecue and cocktail sauces. Ground cloves mixed with maple syrup can be poured over cooked sweet potatoes. Whole cloves can be added to bean soup and split pea soups but should be removed before serving.

Culinary Uses: Cloves can easily overpower a dish, particularly when ground, so only a few need be used. Whole cloves are often used to “stud” hams and pork, pushing the tapered end into the meat like a nail. A studded onion is frequently used to impart an elusive character to courts-bouillons, stocks and soups. Cloves are often used to enhance the flavour of game, especially venison, wild boar and hare. They are used in a number of spice mixtures including ras el hanout, curry powders, mulling spices and pickling spices. Cloves also contribute to the distinctive flavour of Worcestershire sauce. They enjoy much popularity in North Africa and the Middle East where they are generally used for meat dishes, though rice is often aromatized with a few cloves.