Be the first to review this product
£1.00
In stock
SKU
Natco Fenugreek Seeds 100g jar
Overview
Methi Seeds
Add to Wish List Add to Compare
Skip to the end of the images gallery 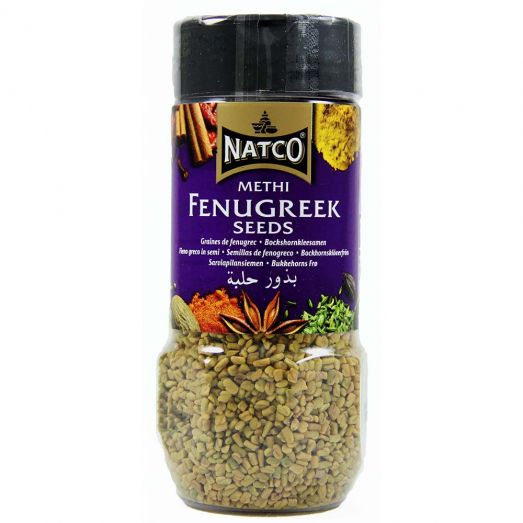 Normally sauteed in hot oil before adding to your vegetable dish. Used in pickles and chutneys and an important ingredient of the Vindaloo. Sprouts easily like cress. Excellent in salads.

Methi or Fenugreek is native to an area extending from Iran to northern India, but is now widely cultivated elsewhere, including China, North and East Africa, Ukraine and Greece.

Its taste is somewhat bitter and peculiar, not unlike celery. Egyptians use fenugreek seeds for medicinal purposes or roasted the seeds to use as coffee. They also ate sprouted seed and fresh leaves. People in India use the leaves as a vegetable and the seed as a spice in curry. Derivatives are used as flavouring for imitation maple syrup, vanilla compositions, rum and butterscotch.

Culinary Uses: The major use of fenugreek is in curry powders, essential in many mixtures, especially vindaloo and the hot curries of Sri Lanka. It is an ingredient of Panch Puran, the Indian five-spice mixture. In home-made powders, the amount used can be controlled, but in cheap bought powders it often overpowers. When fish is curried, particularly strong-tasting fish such as tuna and mackerel, fenugreek is frequently included in the spice mixture. Many chutneys and pickles incorporate it and it gives a tangy aroma to vegetables. The leaves, both fresh and dried, are used in meat curries, dhal and vegetable dishes and chutneys.

Storage: Once opened remove to an airtight container. Store in a cool dry place

Allergy Advice: Packed in a factory that handles nuts in a separate area