Be the first to review this product
£1.25
In stock
SKU
Natco Paprika Powder 100g Jar
Overview
Ground Paprika
Add to Wish List Add to Compare
Skip to the end of the images gallery 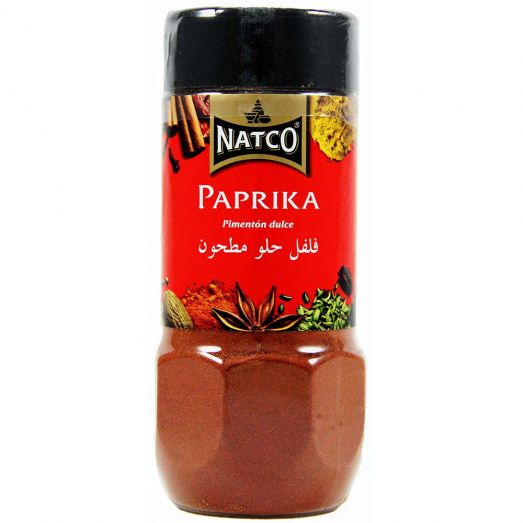 Paprika is a spice that comes from a mild red pepper grown in Hungary, Spain, South America and California. It is a brilliant red powder often used as a garnish. Paprika ranges from sweet and mild to hot. American paprika is the blandest, while Hungarian paprika has the greatest range of flavour. It is the primary flavour in Hungarian cooking, including dishes such as goulash and chicken paprikash. In the United States, it is often used as a garnish on stuffed eggs, fish, and cheese and vegetable casseroles.

Culinary Uses: Paprika is intimately associated with Hungarian cuisine especially paprikash and goulash. Many spiced sausages incorporate it, including the Spanish chorizos. In India paprika is sometimes used in tandoori chicken, to give the characteristic red colour. Paprika is an emulsifier, temporarily bonding with oil and vinegar to make a smooth mixture for a salad dressing.

Allergy Advice: Packed in a factory that handles nuts in a separate area