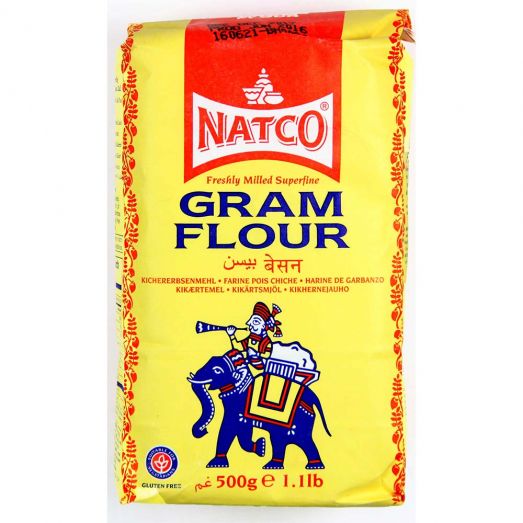 Natco Gram Flour is the finest gram flour available in the UK and is the UK's gram flour brand leader. Unlike other gram flours which are often made from ground chick peas, Natco Gram Flour is made from 100% Chana Dal. It has a slightly nutty flavour and an earthy aroma and is used generally as a thickener for curries and soups and to make pakora and bhajia batters.

Culinary Uses: It is often stated that chana dal is chickpea flour, this is only true of inferior flours which are not true gram flour. True chana dal is made from ground chana dal - a kind of yellow split pea which is smaller and sweeter than chick peas. Chana Dal is often called "Bengal gram flour" which is a generic term for lentil flours given by the British who first imported lentil flours during the Raj. This is also a confusing term as the original lentil flours called Bengal gram were actually made from Black Gram but made and imported from Bengal. In some quarters the name has stuck, and Gram Flour is even today sometimes called Bengal Flour.

Gram Flour is most commonly used to make light tempura style batters which are lightly spiced and are used to make the fried snacks called pakoras or with onion to make bhajias (bhajis). A thicker mix is used to make the lentil shreds seen in Bombay Mixes and it is also used in some Indian sweets mixed with ghee and sugar or jaggery. It is a versatile flour and contains carbohydrate (therefore may not be suitable for people on low carb diets) but is gluten free and very high in protein.

Allergy Advice - Packed in a factory that handles nuts in a separate area.

Country of Origin - Milled and Packed in the UK